This is what happens when you are performing a study on a landfill over a period of months, the landfill fills up between visits which prompts the local government to propose an incinerator, causing local protests and riots, leading to the foreigner (me) getting arrested for potentially being an “undercover reporter” rabble rouser, then having to write a letter to the mayor explaining it all.

It was spring 2015 in Ningbo, love might have been in the air but I was planning my graduation dissertation. My original idea to perform a technical and economic analysis of the lab scale pyrolysis system was thwarted by my not having access to PhD labs and equipment. Because I’m a reasonable guy I had settled on a human exposure pathway study of sludge and municipal solid waste derived pollutants at the Shui Tong Ao landfill, a coastal landfill about two hours southeast of Ningbo.

This particular landfill was sited along the coast, not the most environmentally friendly choice but an interesting site from a research perspective. The father of my friend and fellow UNNC student Jessica, Mr. He, had gone through the relevant organs and obtained official permission for me, as a student of Nottingham, to access the site and collect samples. I was not alone on this first trip, being concerned about my safety Jessica, her father, and my dissertation supervisor had all come along. Upon arriving at the landfill I presented my papers to the rather friendly landfill manager and his teenage daughter. I’m not sure why his daughter was there. Later the manager would connect me with a Chinese Academy of Science researcher who was characterizing the landfill’s contents and who graciously shared his (unpublished) data with me.

It was obvious the landfill had begun life as a dump at the end of the road, then as the landfill expanded more thought was put into the process. There was a weight station and manager’s quarters situated at the end of the road, from there the landfill extended out towards the ocean. Newly compressed cells of MSW covered the first third of the landfill, what looked like a gas flaring station sat idle near the halfway point. The most recent addition to the landfill was an open expanse of dirt where the ocean once was; rocks held HDPE containment liners in place while PVC pipes stood by waiting to start circulating leachate. Flanked on the north and south edges of the landfill were a mix of woodlands and small crop fields. The odd goat wandered in and out of view. 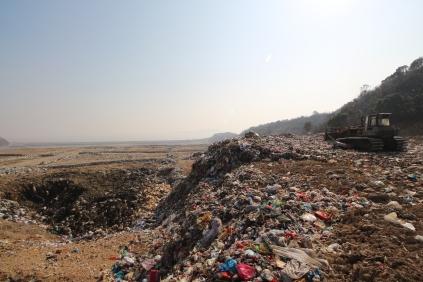 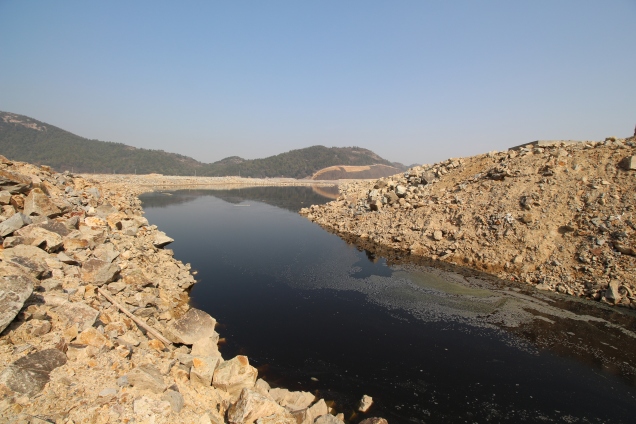 After some quick mapping, preliminary sample bagging, and rough calculations I had enough data to return to the lab and define a sample collection method. After writing and submitting the desk study and research plan I’d return to collect one set of samples, then again a few weeks later for a second set.

I never made it.

June rolls around, I’m finished with the semester, and it’s time to focus on the dissertation. The idea was to collect and analyze samples throughout the summer, then write the dissertation during the fall/winter in between classes. My second trip out there I was alone, I wasn’t letting Jessica or my supervisor spend an entire day at a landfill on my behalf again. By his frowny face I could tell the landfill manager was not happy to see me again. He seemed sullen and suspicious. Undeterred, I put on my cowboy hat, pulled out my auger, gloves, GPS unit, and got to work. Within a few minutes a black Audi, the official vehicle of Chinese government employees, arrived and discharged several well fed plainclothes individuals. There was a driver and three young men, early 20s, wearing sunglasses and the fashion of the day, a t-shirt two sizes too small so that their beer guts were rather accentuated.

They had the Chinese smile while quite casually, with an almost indirect fashion, attempting to restrict me from my work and direct me towards the Audi. I knew what they were doing, but blessed with a rather acute case of distrust of authority, I resisted. There were three of them but I had a beard and about 20cm. After a few moments of conspicuous resistance I acquiesced, following them to their car. I was about 45% sure they were going to drive me somewhere and beat me up, being from Texas I had a large can with me for such emergencies but luckily this didn’t happen.

They drove me to a hotel where they put me in a room then left. The hotel was rather nice, maybe 4 stars. After a few minutes two uniformed police officers, two older men in suits, and the honeypot arrives. The honeypot, a rather attractive young woman with a proper British accent who went by Athena, politely asked why I was at the landfill and what I was doing. My bilingual officially stamped and signed Nottingham “permission document” didn’t seem to impress or enlighten her. Next she wanted my passport, as this wasn’t the first time I had problems at a dump/landfill, I knew losing my passport would put me at a major disadvantage, so I hadn’t risked bringing it. Instead I connected with her on Wechat and sent her photos of my student visa, passport, and student ID card. 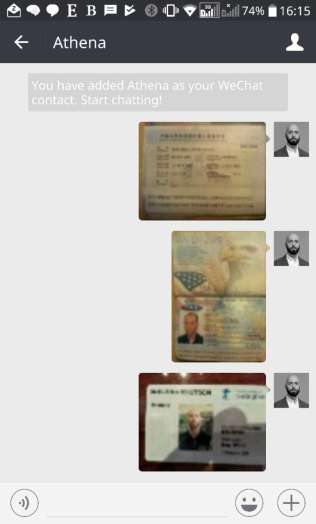 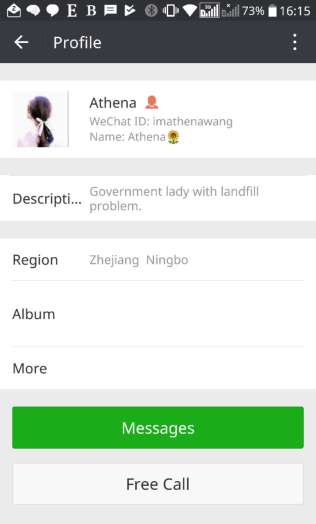 After around 20 minutes trying to catch me off guard and get me to spill the beans about being a secret undercover reporter, Jessica’s dad arrives. They direct him to wait outside, he seemed agitated. They did actually think I was a reporter, in fact they were certain of it.

Seeing the female persuasion wasn’t working, the police officers and men in suits (who never introduced themselves) tried to crack me, threatening me with detention or saying I’d be expelled from China. I wasn’t buying it so eventually they let me go and decided I had to write a letter to the mayor explaining what I was doing at the landfill, provide a complete record of my actions there, and apologize for hurting the feelings of the Chinese people (their words, not mine) for trespassing. And just apologize in general, a point reiterated by Athena the honeypot. I wrote this, translated verbatim by Jessica:

My name is Seth Knutson, I am an American studying Environmental Science at The University of Nottingham in Ningbo, China. As part of my research I am performing a study on potential human exposure pathways of heavy metals. This process describes how heavy metals from sludge and factory effluents enter the soil, then water, plants, and finally humans. Prior to conducting research at the ShuiTongAo landfill I discussed my research with other scientists, including Chinese Academy of Science researchers, who are also performing research on this same landfill. This is how I selected your landfill.

Several months earlier I visited the landfill together with my professor and received permission from the landfill manager to collect soil and plant samples on and nearby the landfill. I can only assume that if he granted permission he was authorized to do so, if he was not authorized to grant permission he should have directed me to the proper department to request permission via the proper channel. My friend Jessica He, who is from Xiangshan and also attends the University of Nottingham, agreed to help arrange transportation for me to and from the landfill. Trust and friendship like this is what builds connections between our two countries.

Scientists and engineers across China, including myself, are actively developing new processes and technologies which enable cities like yours to advance their waste management capabilities, improving the environmental and citizen’s quality of life. A critical part of this development is the collection and analysis of sample data so that we can fully understand the challenges which need to be solved. Myself and other scientist studying at this landfill and other sites across China are a benefit, not a threat.

You should have the complete written record of my discussion concerning my purpose of visiting the landfill, provided by your associates who questioned me. You may contact the University of Nottingham to verify my enrollment and program. I have provided their contact information below.

Jessica later informed me that the landfill had been designated “filled to capacity” between my visits and that an incinerator had been planned. Incinerators are either non-polluting or affordable, with the latter being a more popular choice among government decision makers in China. The citizens, preferring the former, had begun a steady schedule of protesting at the landfill. Seeing a laowei white guy at the landfill would only embolden them, especially if the laowei were a reporter.

Regrettably, they did not let me access the landfill again, ruining my graduation dissertation plans. Although, silver lining, I did get to conduct my original proposal, a TEA of the pyrolysis system. Unfortunately with the landfill fiasco taking up the entire summer and fall, and with the few staff on campus being of the opinion that I didn’t need to access PhD labs (too much paperwork on their part, apparently), I ended up only having a few weeks, during Christmas, to conduct all of the research, then a similar amount of time to write and submit the thing.

← Not dead, just inadvertent stealth mode
The word “environment” appears to be trademarked in Zhejiang, China →